About midway through our "The Hush" fundraising campaign I came across this article: HERE

It's an interview with Director Brad Bird (The Iron Giant, The Incredibles and more) who will be releasing his first live-action flick the new Mission Impossible film. If you don't want to read the entire article, here is my favorite part - a summary of what Pixar does that everyone is chasing:

"Everyone in Hollywood says they wish they could do it like Pixar, but they really don’t. There’s no secret at Pixar, but there is a belief in letting people pursue something with passion and take chances, and most of Hollywood, really, doesn’t like that. It’s too scary. Some studio executives will say they love obsessive creators who take risks, but really most of them would rather play it safe. Projects cost a lot of money and people would rather follow patterns they know and make things safe and accessible. Hollywood wants there to be a math formula for making hit films. To make something really great and different and interesting means taking risks and following these ideas in your head." - BRAD BIRD

To sum it up: what is unique about Pixar films (which I love by the way) is that they are made with passion and risk taking embraced - while Hollywood, no matter what they claim, loves to play it safe. It's one of those things where you can either do something that is different and unlike what people are used to (in order to "sell" tickets) or you can focus in on creating a new experience and allowing the strengths of you film to bring in your audience.

Unfortunately, I feel that even independent film has become cliche'. There are now formulas for films that epitomize "indie" - ingredients that are often just as repetitive as the worst stuff pumped out of the big budget movie making machine. These films now have big money and names involved. What are we to do?

Just listen to Brad Bird: take a chance and have conviction in doing it in new way. Do not let generalized expectations of genre, movie conventions, and so forth, dictate your work.

This reinforces my belief in what I've been trying to do as a filmmaker - cater to the story, as it presents itself. Do not shift it just to make it fit into a box that everyone will recognize. People that get it, will really be moved by it (for many reasons - one of which is you did something unique).
Posted by Vincent_C at 3:27 AM No comments:

The Hush is a film. However, to me, it is more than "just a movie." It is an experience. It is a journey. It is three years of my life in 90 minutes. It is close to being another child in many ways. It is hope and lessons learned in life, shown in the context of fictional characters in fictional settings.

My producer Sofia and I have decided to self distribute our film - the times and the technology have aligned so that it is very possible to do so. With companies whose sole purpose is to create a method for us (indie artists and filmmakers) to reach professional platforms, I say why not.

With a handful of public screenings in our history, I have had some amazing reactions from people that have seen my film, both artists and moviegoers. This is all the proof I need to know that I have succeeded in creating the experience I desired, but also proof to me that there is an audience for genre bending film.
Posted by Vincent_C at 4:20 PM No comments:

Email ThisBlogThis!Share to TwitterShare to FacebookShare to Pinterest
Labels: distribution, DIY, the hush

THE HUSH - Screening and Event 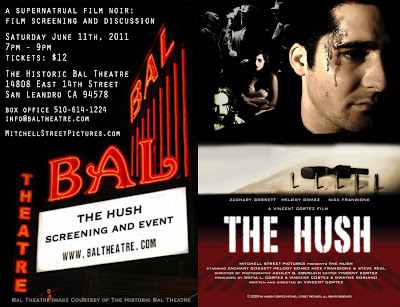 "The Hush", will be showing at the Historic Bal Theatre in San Leandro CA on Saturday night, June 11th 2011, followed by an exclusive in depth retrospective about indie filmmaking and tackling high concepts on a low budget. The cast and crew will be in attendance.

*The retrospective will include a 10 minute behind the scenes video exclusive, as well as a Q&A and discussion with the cast/crew.


PURCHASE and RESERVE by clicking HERE.

Greetings,
Just a quick note that I will be on a panel this Sunday (4/3/11) at WonderCon SF. The panel is about indie sci-fi/DIY filmmaking. I will be showing a clip from "Roamer," as well as discussing Sci-Fi filmmaking on the cheap. The panel begins at 2PM in Room 236.

Come and check it out. It will be entertaining, but especially insightful. Stay tuned for more!
Posted by Vincent_C at 12:24 AM No comments:

Also, check out The Hush on Facebook and become a friend:
facebook.com/thehushmovie

Who is this guy?